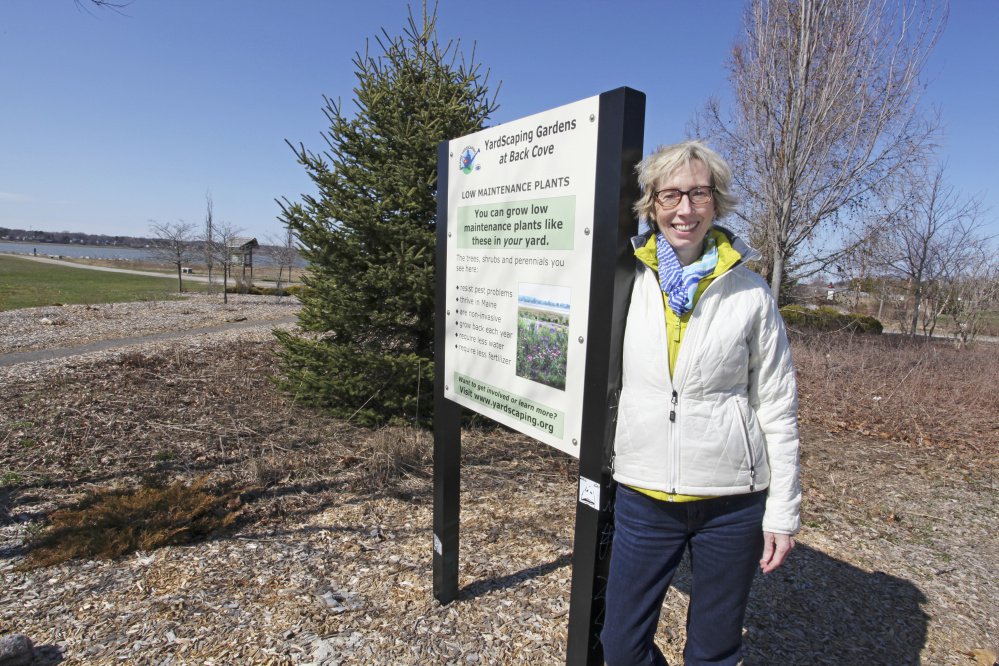 Whether serving with the trail group or getting her hands in the dirt, she acts on her belief in the importance of urban natural spaces.

Aurelia Scott arrived in Maine in November 1997, just months before one of Maine’s most infamous ice storms, which was funny (in a non-ha-ha way) since she was at that point primarily a gardening writer eager to get her own garden started. It seemed like that winter would never end. As she adapted to her new community she wrote a book about obsessive rose experts (including one of her then-neighbors) and became active in Portland Trails. We talked about everything from competitive rose growing to organics and the differences between personal and public green spaces.

HEROIC MEASURES: Scott was on the board of Portland Trails for 12 years and has served as the group’s president and interim executive director. She also put her writing chops to use as the editor of the newsletter for 14 years. As she retires from the editing job and the group celebrates its 25th year of greening the city by the sea, Portland Trails has selected her as one of its “Heroes.” She’s particularly proud of how the newsletter is received. “It’s been something that people told me that they look forward to receiving and actually made time in their busy days to put their feet up and enjoy it, which is rare these days.” Scott will remain on Portland Trails advisory board.

“I take credit for being a cheerleader. It is a joy and a privilege to be involved with an organization that is helping transform for the better how Portland and its neighboring towns look and how people live and interact. I feel strongly about how important it is to have people be able to get out of their cars and walk safely between neighborhoods. We are creating shared, linked green space.”

HAPPY TRAILS: She gives credit to Tom Jewell for the concept of an interconnected trail all around the city, an idea she supported from the get-go. “I said, ‘Let’s just make this happen,’ ” she said. “I take credit for being a cheerleader. It is a joy and a privilege to be involved with an organization that is helping transform for the better how Portland and its neighboring towns look and how people live and interact. I feel strongly about how important it is to have people be able to get out of their cars and walk safely between neighborhoods. We are creating shared, linked green space.”

Those 70 miles of continuous trails might be a given now, but Scott remembers “clearing the shrubs and the icky stuff away.” She remained on duty after the trails were laid. “One task that is assigned to all board members and most advisory members is to walk a trail once a month and report on it to Jaime Parker, our trails coordinator.”

OUT OF THE DESERT: Her background is as a gardening and travel writer. She got serious about gardening herself when she and her husband were living in New Mexico, although she admits hers was a very steep learning curve. “I did all the wrong things.” Which is fine, she said. “It is how you learn.” She took the Master Gardener class and had frequent phone consults with her father, who had managed the family’s backyard garden when she was a child. Coaxing life from clay in a dry climate wasn’t exactly preparation for planting a garden in Maine, so she retook the Master Gardener course when the couple relocated.

PLANT PUBLISHING: She’s the author of “Otherwise Normal People: Inside the Thorny World of Competitive Rose Gardening,” which featured one of her Portland neighbors, Clarence Rhodes, a frequent judge for the American Rose Society. “It’s about the crazy people who exhibit roses. Which is OK to say because they say that about themselves, about the lengths they will go to for the plants they love.” That’s been a theme. “I like very much to write about the intersection of people and plants,” she added. “We are learning more and more about how important plants and greenery are to the emotional health of individuals and the health of a city and a community and how they affect how people interact.”

She still writes about gardening for various outlets. But right now she’s working on something very different: an adventure novel for middle readers set in the 19th century and a memoir about “women and nakedness and lingerie.”

PEOPLE’S PARK: Here’s a surprise: “I no longer have a private garden.” In 2010 Scott and her husband moved to a condo in downtown Portland. That might have led to withdrawal symptoms if she hadn’t found various public gardens in need of helping hands. “I am on the ‘green gang’ of our condo,” she said, which does plantings around the buildings. She also joined the St. Mary’s Garden Club based in Falmouth, “a really environmentally conscious garden club.” “Those are my ways of having my hands in the dirt, which is important,” she said. “There have been times in my life where it was very important to me to have my own garden and be actively creating something in partnership with the plants. That time may come again, but right now I feel contented to help nurture something along, and it doesn’t have to be mine.”

BACK COVE BACKSTORY: Like, for instance, her really big shared backyard. Scott’s condo overlooks Back Cove, where she works on the Portland YardScaping Demonstration Gardens, a sustainable landscaping project that’s about more than beautifying. “It’s all with the goal of educating people on how herbicides, pesticides and fertilizers can damage our waters,” she said. “And how you can be a successful gardener without using any of those.” The 2.5-acre gardens, opened in 2011, feature trees, shrubs and perennials that can thrive without chemical inputs or massive irrigation. “Earlier in my gardening life, I often tried to push the envelope in terms of what plants would grow happily where I was living. I might want some exotics here or there. But you end up wasting some kind of resource for something that might be only moderately successful.” Like water in Taos or planting something that bugs love to eat in Maine, unless you use chemicals. “The longer I live on this planet, the more organic I become.”

HELPING HANDS ON DECK: But that means human intervention is required at Back Cove, say volunteers to take on tasks like pulling weeds and mulching with cardboard and bark. “It’s a big job,” Scott says. “It takes occasional heavy work and constant upkeep because obviously we don’t go around and spray things.” Idexx sends employees to help with the grunt work. “We would love to be able to expand that to other businesses.” (For ways to volunteer, visit the group’s Facebook page. Bonus: “You get thanked by passers-by. People say ‘Good work’ or ‘Thank you,’ and that is just wonderful and doesn’t always happen in your backyard.”