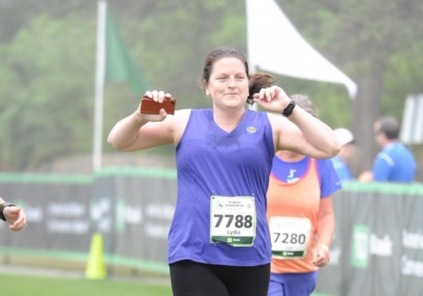 When Lydia Savage crossed the finish line at the Trail to Ale 10K this year, she was certain of one thing: she was last. Over 1,000 runners and walkers had finished before her, most of them already celebrating with pizza and beer by the time she made it to the after-party. But Lydia wasn’t disappointed or surprised by the results. In fact, her plan all along was to finish last.

Every year, Lydia, 55, volunteers as a sweep walker for the Trail to Ale. The sweep walkers, or “sweepers,” are a team of three volunteers who walk behind the participants and make sure no one is injured or forgotten along the course. “Essentially, it is for safety,” says Lydia. However, she says there’s more to it than that. “When you sign up for a race, you don’t want to be the person who finishes last.” For those final participants, it boosts morale to know that there are three people finishing behind them and three names below theirs on the final results. Lydia likes to be one of those names.

As a runner herself, she understands the significance of the sweeper. “I didn’t get involved with any kind of running community until 2012,” she says. Her brother is an ultra-runner who recently completed a 100-mile run from Flagstaff to the Grand Canyon. Meanwhile, Lydia is a member of “a running group called the Back Cove Crawlers,” she says. “As somebody who, if not for sweepers, would have been last in many a race, I appreciate the sweepers!” she says, laughing.

Lydia assures that the energy at the back of the line is positive all the way to the end. “The very last people who crossed this year were sweet. They walked the whole way. I noticed when they were approaching the finish line, they held each other’s hands and crossed at the same time,” she says. “And they were the fifth- and fourth-to-last. Not the last.” For many participants, finishing the Trail to Ale is symbolic of something more than just speed. “Whatever way somebody crosses that line is huge,” she says. Even the slowest walkers “have lapped everybody sitting on the couch!”

A resident of the Munjoy Hill neighborhood, Lydia has a deep appreciation for the Eastern Prom Trail and Back Cove Trail that serve as her commute route, her classroom, and her playground. She walks those trails to USM, where she is the Chair of the Geography and Anthropology Department. “I teach planning and sustainable communities, so I’ve always talked about urban green space and Portland Trails in my class,” she says. “When I have students doing field work, I have them go look at the trails and talk about the difference between moving through the city on a Portland Trail versus a road,” she says. “In my professional life, they’ve always been this thing I’ve taught, and in my personal life, I’ve just always used them.” She and her 12-year-old shiba, Kazuo, have spent countless hours on the trails. “I think my first memory of bringing him home was actually walking on the Eastern Prom in January, and just having him play as a puppy down there.” They still walk the trail together every day.

Lydia, a longtime member of Portland Trails, sees her job as sweeper as a way of saying thanks. “I feel like I’ve helped a very important event in some very small way, and I feel like I’ve contributed to a really important thing in my life. We’ve literally used a Portland Trail daily,” she says. You can bet that next year, when the Trail to Ale participants are waiting for the starting gun, Lydia will be at the back of the pack, more than happy to come in last.