Tales from Then and Now: Stories from the past 25 years.

From a few ideas brewing at a kitchen table to 70 miles of trails and green space that you can walk,bike, or play on every day–the Portland Trails network has become one of the most distinctive features in our city. It’s hard to imagine Portland without the trails. So let’s roll back the clock and explore Portland Trails, then and now, with a few origin stories from our 25 years.

Just One Phone Call: A Beginning 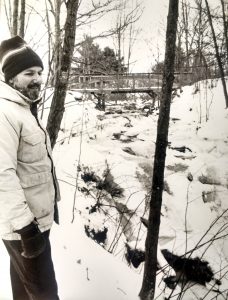 CO-FOUNDER, TOM JEWELL’ S life is inextricable from the trails. Looking over the cityscape from his office window, he sees a very different city than he did just a few decades ago. In the mid-70s, Tom, then a biology student at the University of Southern Maine, saw an article in the Press Herald announcing Maine Audubon had purchased a parcel in the now Fore River Sanctuary. Tom had grown up in the neighborhood, he’d played on that land as a kid. His curiosity piqued, he picked up the phone and called Audubon only to find they’d never been out on the land at all. He offered himself as the perfect tour guide.

“The enthusiasm for this space was infectious,” Jewell says, and that year he made his first of many trips to the city planning board to propose the idea of a nature sanctuary. It was a visit that would set the stage for many future plans.

Years later, the waterfall adjacent to the property went up for auction, and Jewell was back at the planning board, encouraging the city to keep the land for public use. “The attitude the city has towards open and green space has changed drastically for the better since the year they tried to sell the waterfall,” says Jewell now. “That’s certainly something I’m proud to see.” Lucky for
Portland, Jewell’s parents put a bid on the property and won. Years of cultivating interest and excitement for this parcel paid off, but the fight for the Forest City had just begun.

Looking into the future,Tom—still an active board member—has big dreams of car-free bridges connecting communities to the peninsula. These plans are exciting and seem world away, but given his experience with tiny actions leading to bigger things, the
future seems bright. As Tom says, “I always wonder, if it hadn’t been for that little article or that one phone call, I don’t know where Portland Trails would be today.” 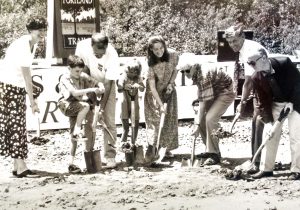 Eastern Promenade: Centuries in the Making

The Prom is a historic example of the significant impact trails have on the city. Transforming an old rail line changed the whole neighborhood. In our 1997 newsletter, Phil Poirier wrote, “Having lived on the Prom for 16 years, I had always seen the old railroad bed as an
industrial wasteland…I’d seen old tires, shopping carts and empty beer cans brought forth in sad, endless profusion. This morning changed the way I thought of the area forever. Though only a section was finished, the grass had yet to fill in…the transformation is stunning. This is more than just a trail.” 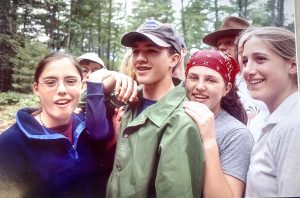 SANDY BUCK WALKED INTO Portland Trails’ India Street office in 2000 to what he describes as “mostly boxes on the floor.” Despite our rag-tag beginnings, the Horizon Foundation President has been a longtime supporter of the trails. “Even in those early days with the boxes–it was a great vision. And that vision was infectious.”

According to Buck, there’s no better example of Portland Trails’ infectious vision than the expansion of the Stroudwater Trail in 2000. “It was a perfect model of public and private collaboration,” he says. The three-year building program roped in over 100 volunteers, the Horizon Foundation, City of Portland officials, and funding and support from LL Bean. But most unique to the project were the seven young people who camped out on the trail for five weeks. They weren’t just rogue campers, but a group from the Student Conservation Association (SCA). Seven kids from across the country gave up kickin’ it at the beach to live outdoors in Portland without running water, to engage with nature and build a valuable urban trail.

For Sandy Buck, the highlight of the summer was Conservation Service Day, where the SCA students led dozens of LL Bean volunteers in trail work alongside city staff. “It was amazing to see how the work brought the team together after five weeks, and how at the end of the experience they had become leaders even with the city workers.”

The trail was just the beginning of changes in the Stroudwater area. Adopt-a-Trail sponsors, Unum, moved in soon after, and today many of their employees use the trail on their campus daily.

Following their stay, the SCA students moved back home and on to other things–one was interested in becoming a fashion designer, another an environmental lawyer. Buck and the Horizon Foundation would go on to fund the expansion of the Stroudwater Trail into Westbrook in 2013. “The students came and they went,” said Buck, “But the trail they built is left standing to this day.”