A sense of adventure and a sense of place

You are here:
Portland Trails scavenger hunt inspires people to explore the “city at your feet”
by Emily Wiederkehr Rothschild
You’ve been hearing a lot about East Bayside from us, thanks to last year’s $75,000 Jane’s Trust grant which funded placemaking work in the
neighborhood. July’s City at Your Feet Scavenger Hunt is an example of one of the exciting projects to emerge over the past year.

First off, a refresher on placemaking: Placemaking is a collaborative process by which citizens reimagine their community and the special places within it, and work to strengthen the bonds between people and those places. Portland Trails has been working with small business owners and residents., and spearheading community projects in the East Bayside neighborhood including trail work days, a winter Bayside Trail bike ride, and this summer’s scavenger hunt.

On July 17th, more than 60 people set out on the first annual City at Your Feet Scavenger Hunt, a cross-city adventure designed to deepen participants’ understanding of Portland and its neighborhoods by connecting them to hidden gems on the trails and in the city. The hunt began and ended on the re-vamped North Boyd Street intersection of the Bayside Trail. Working in teams, participants followed meticulously worded clues that led to a number of well-known – and not-so well-known – trail destinations. One big rule? No cars allowed. Through the event, Portland Trails wanted to encourage active and sustainable transportation in Portland. Teams could walk or bike to destinations, but they also earned bonus points for using the METRO bus or other alternative transportation methods like skateboards or scooters. 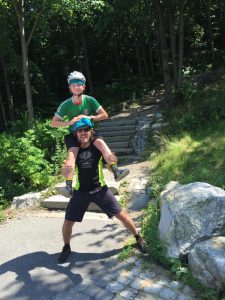 However, this scavenger hunt was neither for the weak of heart nor mind. To give you an idea, see if you can crack
the following clue:
“At the Brentwood Street gate is a community garden and trailhead leading you into the impressive forest behind this Victorian landscape.”
If you guessed Evergreen Cemetery, you’d be right. The Brentwood Farms Community Garden is tucked away, and loved by neighbors, but not necessarily widely known about.
The day was filled with surprises and fun for Portland Trails staff as well, who enjoyed following teams’ progress as they submitted photos via text and social media. Teams from as far away as North Carolina, New York City, and India navigated the city like savvy Portlanders. Staff loved seeing unique examples of collaboration, like the team that shared two bicycles amongst four people and had remaining members run behind as they crossed the city. Equally as surprising—when the time clock struck four, a majority of the teams were back at home base

on time to collect their prizes! 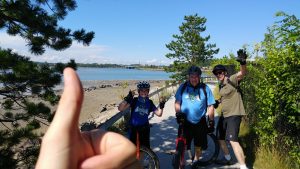 Perhaps the biggest surprise of all? Our first place team, the Portland One Wheelers. These clever trekkers not only racked up mega bonus points for unicycling all over Portland, but they made it to three different neighborhoods, were the only team to find the pocket park on Thompson’s Point, and they took their unicycles on the bus.

Zoe Miller, Portland Trails’ Placemaking Fellow and the co-organizer of the event, reflected on the day, “I was thrilled with the turnout and excitement of participants, which was really a testament to the interest in active transportation and trails.” One of her favorite parts of the hunt was the fact that so many participants rode the METRO that day: “I loved seeing people take the bus for the first time. It’s such a great asset for Portland and the more people who ride it, the b 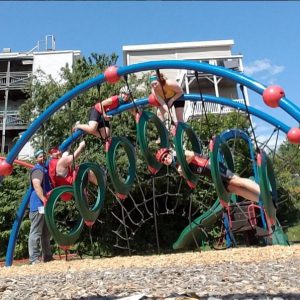 etter and more convenient it will get.”
Miller, a Portland resident pursuing her Masters at the Muskie School, worked closely with Jaime Parker, Active Transportation Manager, and other staff to make the event a success. As the
Placemaking Fellow, she spent this spring and summer focusing on projects that connect Portlanders to the city’s special places and foster a more livable, active, and health city. The scavenger hunt is a unique example of this placemaking, “When asked if they had visited a new place in Portland that day,”said Miller, “Almost everyone at the hunt raised their hands.”
The scavenger hunt is just one snapshot of the work Portland Trails has been doing in East Bayside, but we hope that supporters will continue to keep tabs on our projects in the area, and keep their eyes open for a potential second annual scavenger hunt next year.
Upcoming Events