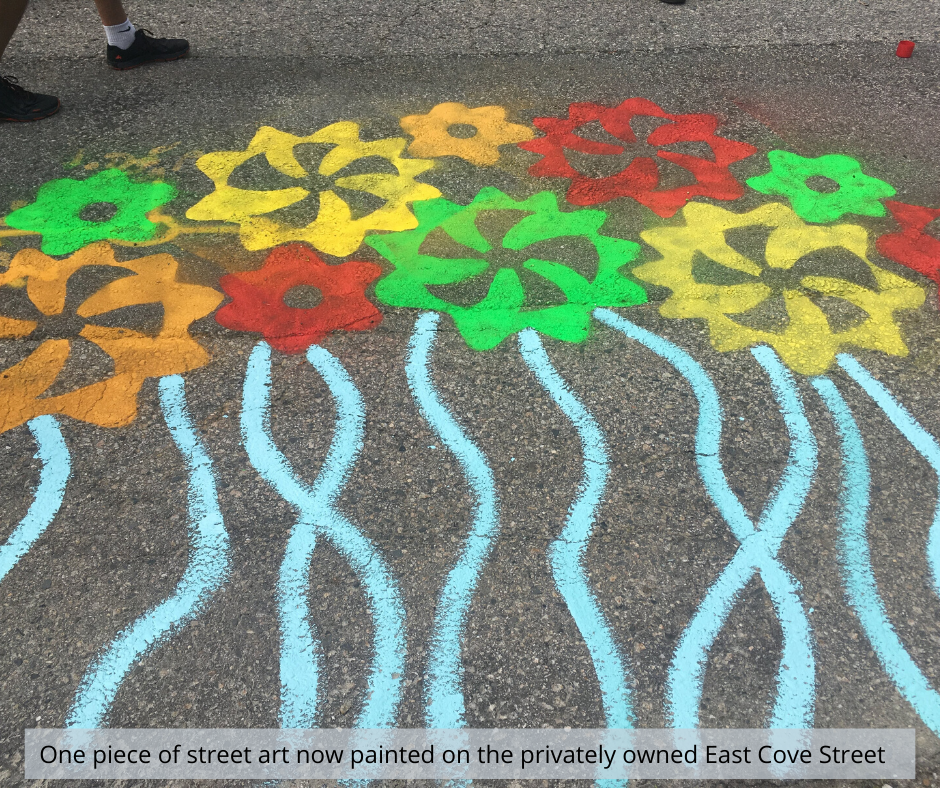 When a trail volunteer group from Idexx met at Portland Gear Hub on August 29th, they thought they were in for an afternoon of trail work in the East Bayside neighborhood. However, instead of shovels and rakes, the volunteers were handed paint buckets, rollers, and large cardboard stencils and were asked to paint flowers on a private street.

“At first, the Idexx engineering folks were like, ‘…you want us to do what?’” says Ainsley Judge, the Director of Portland Gear Hub. It’s a nonprofit bike and gear shop focused on accessibility and education. It’s located on the corner of Washington Avenue and East Cove Street (a private street not owned by the city). “But then they totally took to it and made really awesome petals and flowers and fiddleheads.” The bright, swirling patterns decorate the short dead-end street that leads to a trail head.

So what’s up with the street art? Gear Hub is the recipient of one of Portland Trails’ three placemaking mini-grants, a grant-giving initiative to help cultivate community identity in different Portland neighborhoods.

The idea for this community art project was born earlier this summer at Portland Trails’ annual scavenger hunt City at Your Feet, an event that begins and ends in the Gear Hub parking lot. Each year, Portland Trails has “transformed our parking lot, outdoor storage space, and test ride space into something more than that and created a pocket park,” says Ainsley. Trails Manager Jaime Parker unrolled a square of turf, set up a few wooden benches, added a couple planters, and suddenly the parking area was a gathering place. While the participants were off hunting for clues, he removed a section of chain link fence that surrounded the parking lot (it’s now a short wooden fence), and for the first time, Gear Hub had a gateway to East Cove Street.

“Just opening that up started to change how we were seeing the connectivity. It was like, “Oh yeah! We’re right here,” says Ainsley. Now, kids and families test-driving bicycles could loop through the parking lot and onto East Cove Street freely and safely. “It kind of gave us a seedling, an idea of what this space could always look like.”

First, Gear Hub removed the tall chain link fence and cut back the overgrown plants that isolated them from their neighborhood. Then, in a conversation with Jaime about what to do with their new connectivity, Ainsley says they brainstormed the idea for an art project that would make the street welcoming to walkers and bikers. Because East Cove Street is private, it’s not subject to the same rules as city streets. The project was approved by the landowner and Gear Hub’s neighbors, who were all in favor of the street art.

“We’re a piece of a very car-centric community, and a lot of the infrastructure is designed for cars,” says Ainsley. “Because we’re a community space that promotes cycling and walking and human-powered modes of transit, decentralizing the car in this space was important.”

Additionally, says Ainsley, “We’re kind of in the middle of what is an urban [trail] network. We wanted to highlight that our shop and this parking lot space could be part of that.” A Portland Trails sign on the side of Gear Hub’s building points to a trail that extends from the top of East Cove Street and connects with the neighborhood’s popular Jack Path. Next time you’re walking by the street’s swirls of flowers and fiddleheads, follow where the painted footsteps lead.

“I think [this project] works here because it’s a private road, it’s not a through street, our neighbors are awesome, and our landlords are really supportive, so we end up with a good case for doing a weird thing on a street,” says Ainsley. “It’s a good way to experiment.” She pauses. “But the experiment’s working.” 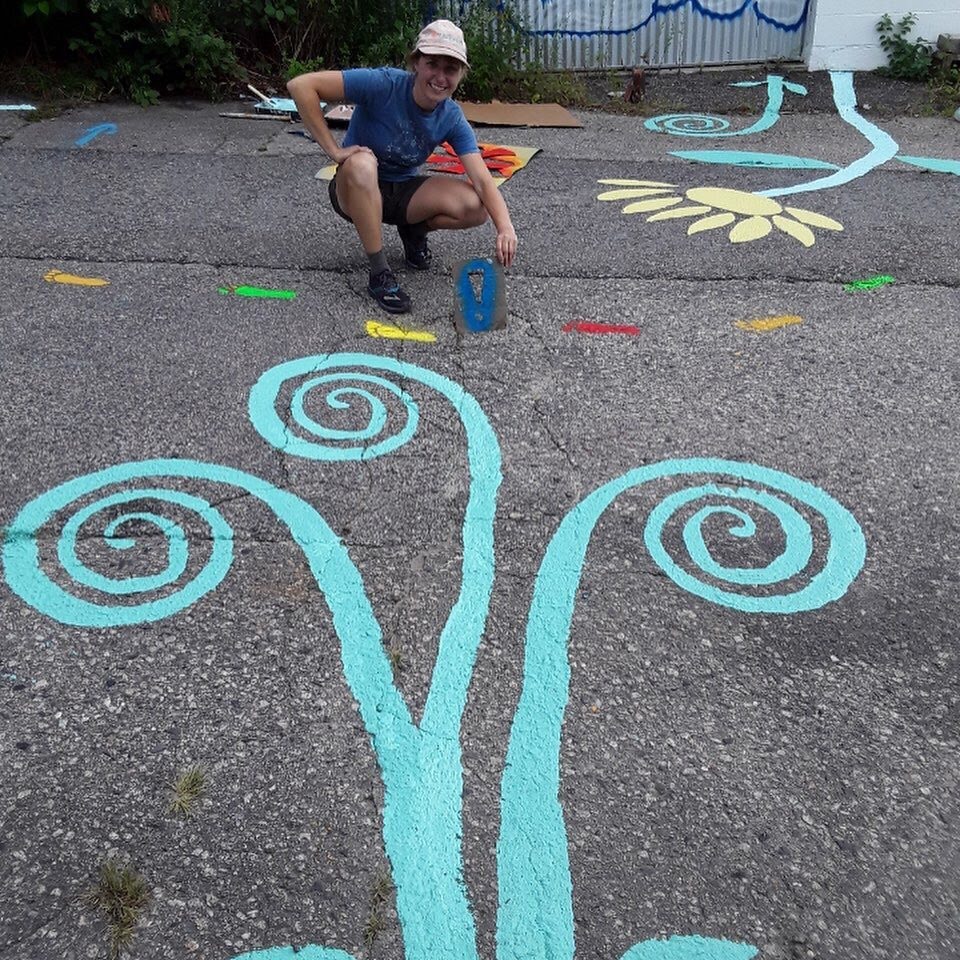 Here’s Ainsley with the footprint and fiddlehead designs on East Cove Street. 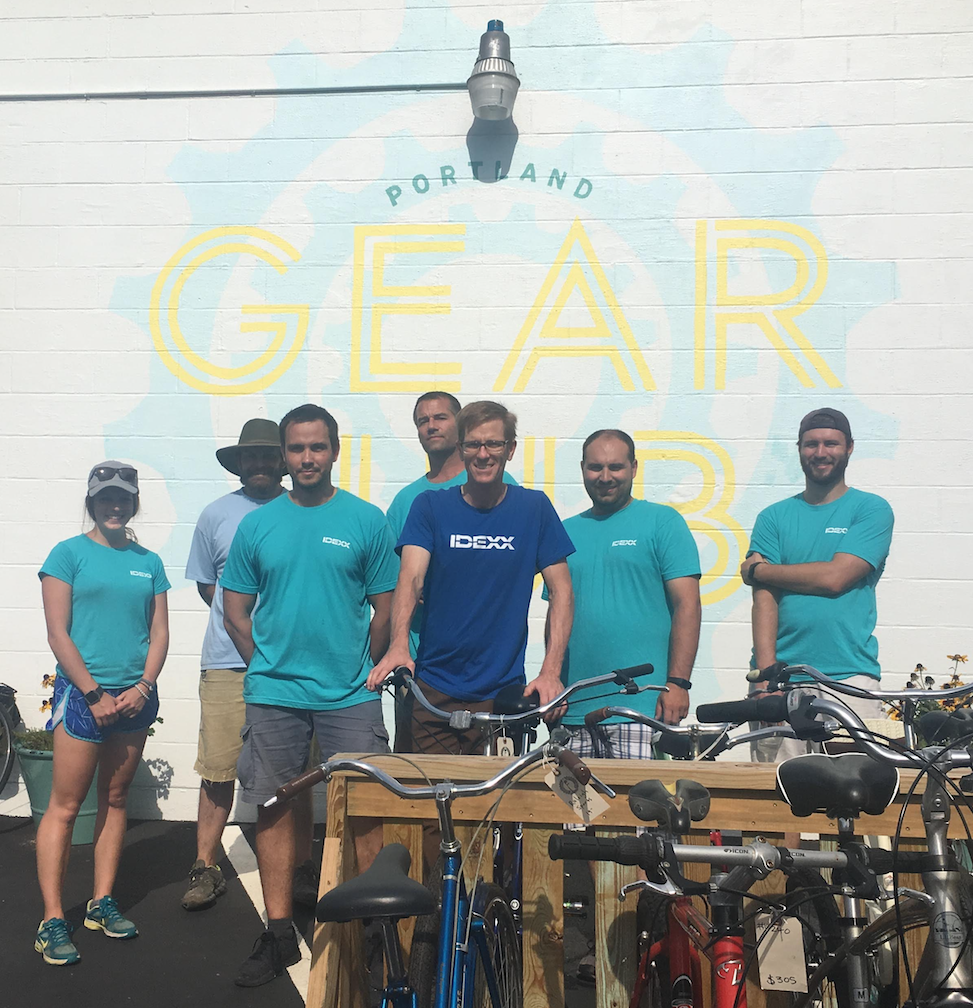 Thanks to our volunteer crew from Idexx for the artistic help! 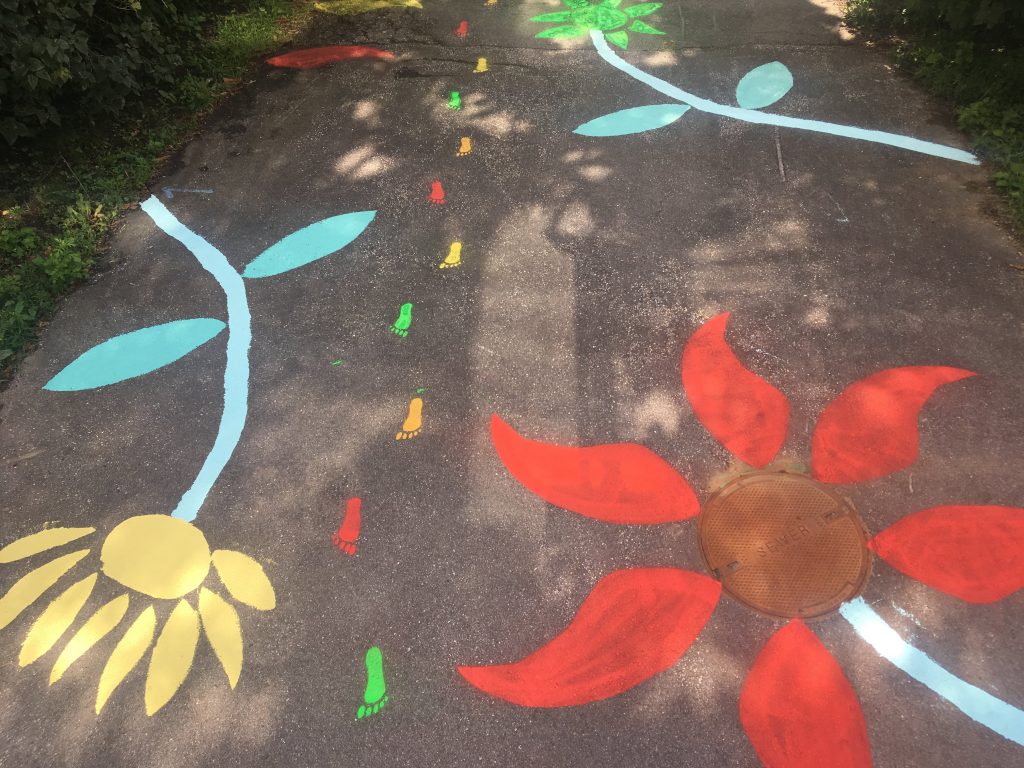