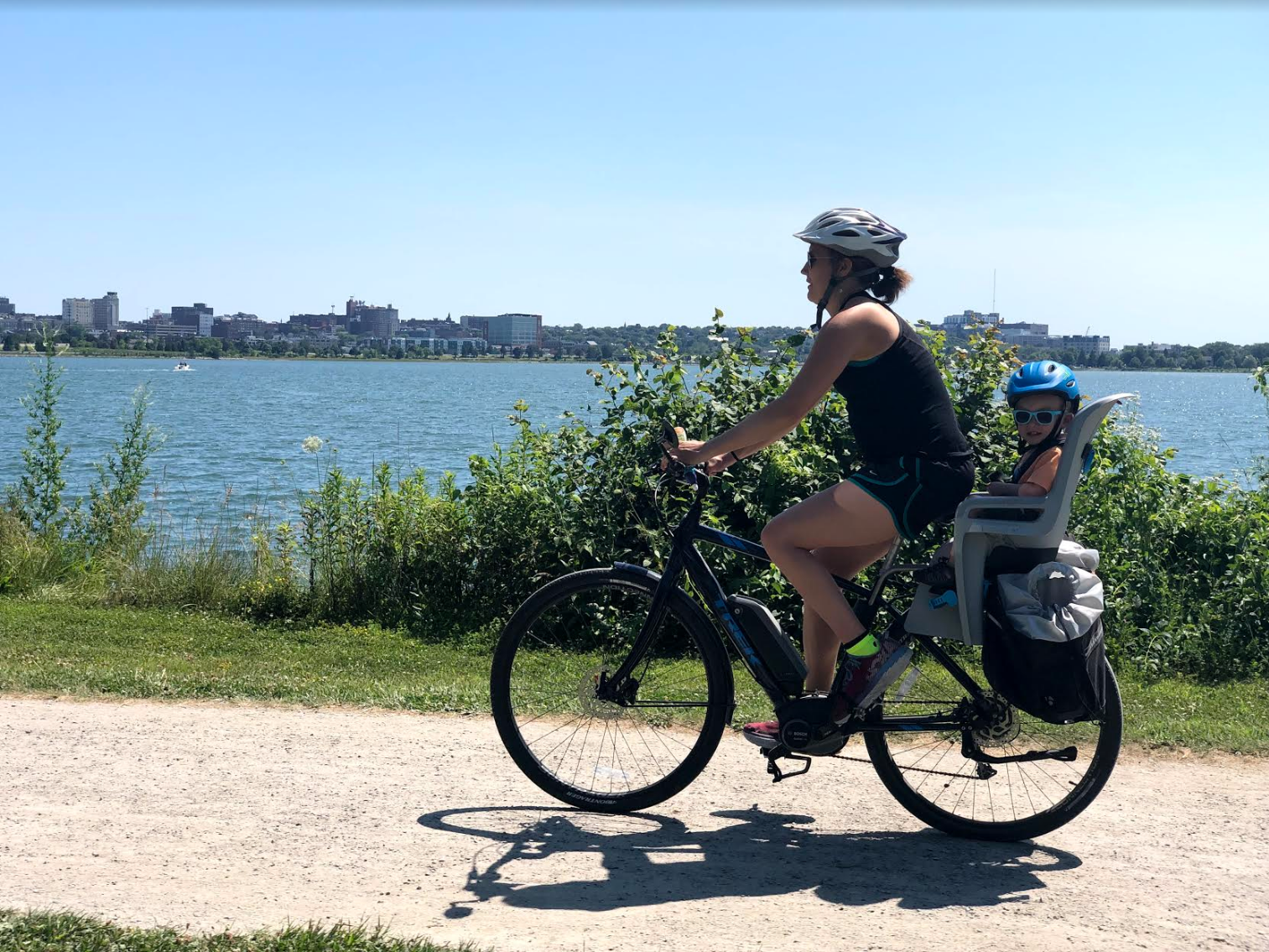 Every morning, Karina Chandler packs her bicycle’s panniers with everything she needs for the day: her computer, her lunch, and a change of clothes. But before she buckles her helmet and heads off to work, she straps her two-year-old son, Nolan, into his child bike seat attached to the back of hers. They bike through Payson Park to Nolan’s daycare, and then Karina travels along the Back Cove and Eastern Promenade Trails to her private practice where she works as a therapist. “I have the world’s best commute,” she says. Nolan, a “bike enthusiast” since he was old enough to wear a helmet, fits right in with his family.

Karina, 33, loves road biking. Her parents, aunt, and uncle bike together on the weekends. Her sister in Holland bikes everywhere she goes. Even her husband, Jeff, bikes as much as he can, although he prefers mountain biking.

Karina began commuting by bike when she moved to Boston after graduating from college. “Unless it was actively blizzarding, I would do anything to avoid public transportation,” she says, referring to her tumultuous relationship with the Boston T. “When my now-husband [Jeff] and I moved to Portland, we felt pretty confident we could get by with one car knowing that we would be using our many bicycles as our other forms of transportation,” she says. Thanks to their accommodating work schedules – Jeff works remotely and Karina’s schedule is flexible – and their proximity to some of Portland Trails’ most popular commuting trails, they’ve been able to make their one-car lifestyle work, even after having Nolan.

Karina hopes more people, especially women, consider commuting by bike, and she lists off some compelling perks. “As a working mom, it can be hard to carve out that specific workout time. If at a minimum you know you’re at least going to get 20 minutes on the way in and 20 minutes on the way home, that totally counts and absolutely adds to the health benefits of moving your body, staying active, and staying strong.” Second, “Traffic has been shown to cause so much stress. It increases our cortisol [stress hormone] levels and makes people feel agitated,” she says. For her, biking is “a much more relaxing way to decompress on my way home than gripping the steering wheel stuck behind cars.” And last, but certainly not least, “Parking! It is such a gift to be able to park my bicycle right in front of my work building,” she says. (Are you convinced it’s time to pump up your tires yet?)

Of course, as with anything, bike commuting does come with its challenges. Karina “absolutely avoids” biking in the snow, but what about rain? “I would prefer it to be dry. I’m client-facing, and I need to look a little more professional than drowned,” she says. “I think [bike commuting] works well for people who dress for comfort. But for women who are going to work in legal or financial offices where they need to be really fancy, it would require a shower and full wardrobe change.” But, as Karina points out, many offices have shower and locker facilities that can help support more active lifestyles. And then there’s helmet hair. “I embrace it…because who cares?”

After Karina’s last appointment of the day, she re-packs her panniers and sets off on the trails once again. “I know that when I show up at my son’s daycare, I’ve let go of my day. I’m refreshed, I’m energized, I’m in a cheery mood,” she says. “Then we can go pedal to the playground together!” Karina and Jeff’s second child is due this December. There’s no doubt their new family member will share a love for biking, too.