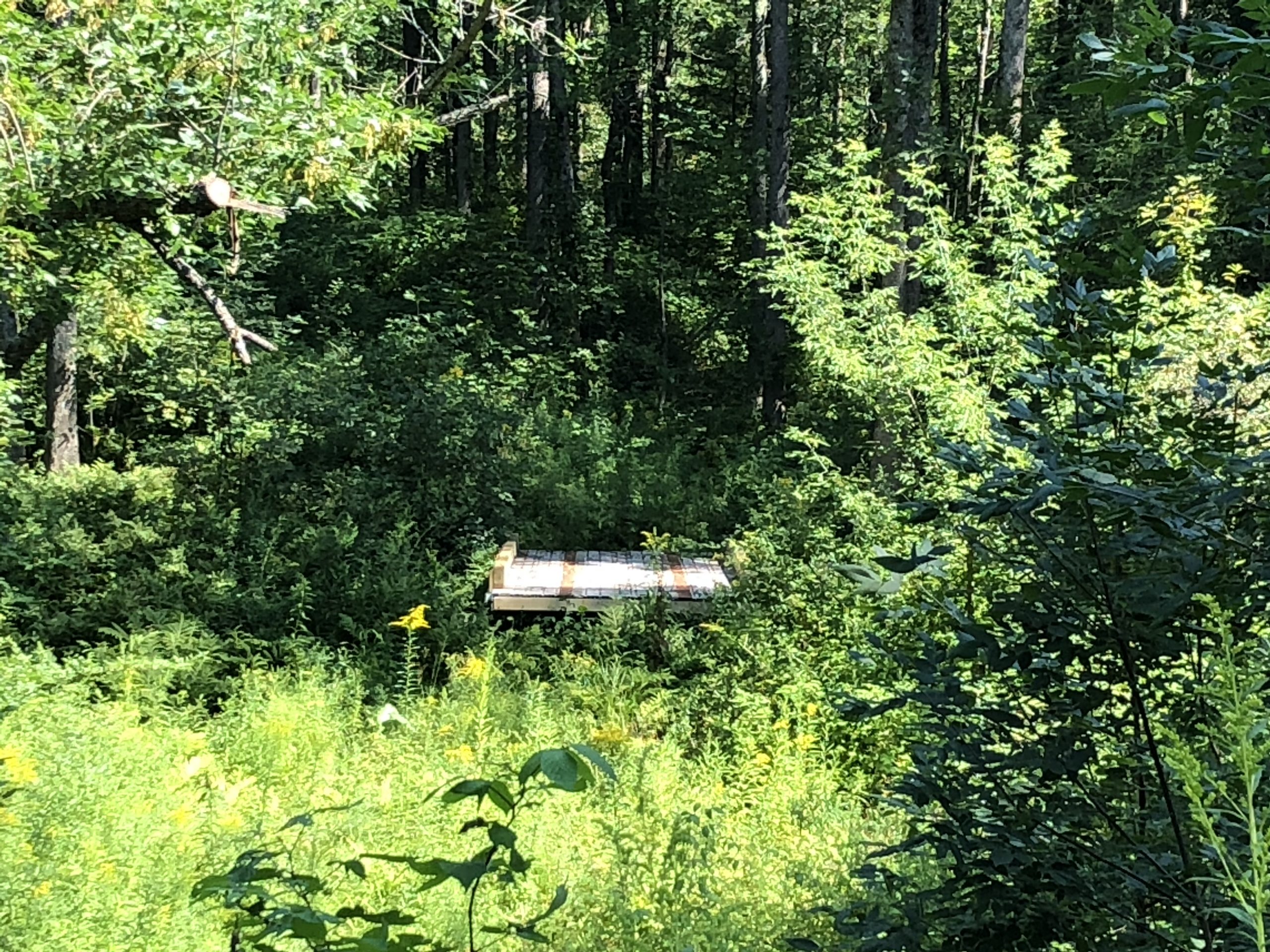 Portland Trails volunteer David Fitz is quite the renaissance man. He’s a retired plastic and hand surgeon, a canoe maker, a backyard trailblazer, a mountain biker, and, as of this spring, a volunteer heavy-metal bridge builder.

The trails behind the Riverside Golf Course, owned by the City of Portland, are a popular winter destination for cross-country skiers in search of local groomed trails. Last fall, after David had constructed several wooden bridges for the Chebeague & Cumberland Land Trust, a Portland Trails staff member reached out to him wondering if he’d be able to help build two similar bridges on the golf course trails.

He and Jaime Parker, the Trails Manager for Portland Trails, visited the two bridge sites to start making plans. While they were looking at the first site, which would cross a narrow stream that feeds into the Presumpscot River, “the ground was pretty soft and wet,” says David. “One of the golf course’s maintenance guys said to us, ‘I’m not so sure you want to build a bridge down there. Come with me.’ He took me inside the maintenance shed and showed me pictures from two floods from years ago. Where we were going to put the bridge would have been under about 15 feet of water during the flood.” A wooden bridge can easily float away in a flood because it isn’t anchored to the ground, he says. These bridges would need to be made of something much more substantial. 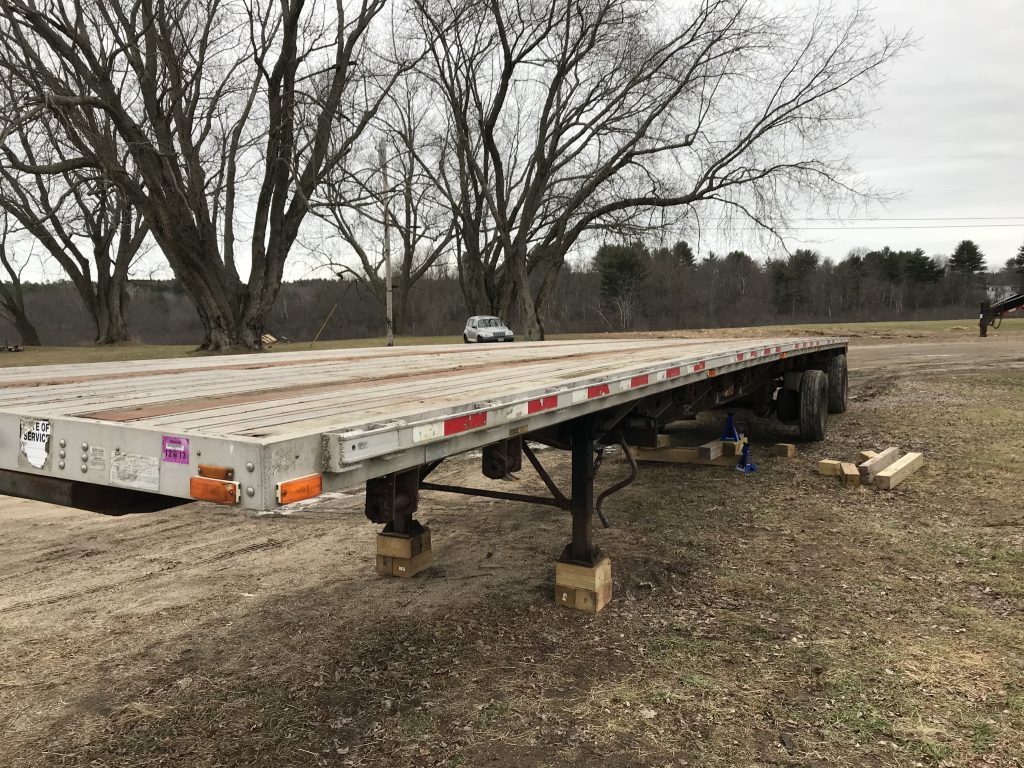 The flatbed trailer before its transformation.

Despite this new challenge, David agreed to continue to help with the project. “I had heard of and seen some bridges that had been made by taking a big flatbed trailer and dragging it across a stream,” he says. They could use the same strategy on these trails; Jaime agreed and acquired the proper environmental permitting. In addition to holding fast in the event of a flood, the bridges would also be wide enough for trail-grooming equipment to drive across in the winter.

David began by acquiring a 48-foot trailer bed that otherwise would have been scrapped, and then he tracked down Ron Porter, a retired metalworker who was willing to help slice and dice the massive 9,000 pound hunk of metal with his acetylene torch. Huddled in parkas in the wintry air, they removed the excess metal and then cut the bed into two pieces: the front half and the back half. 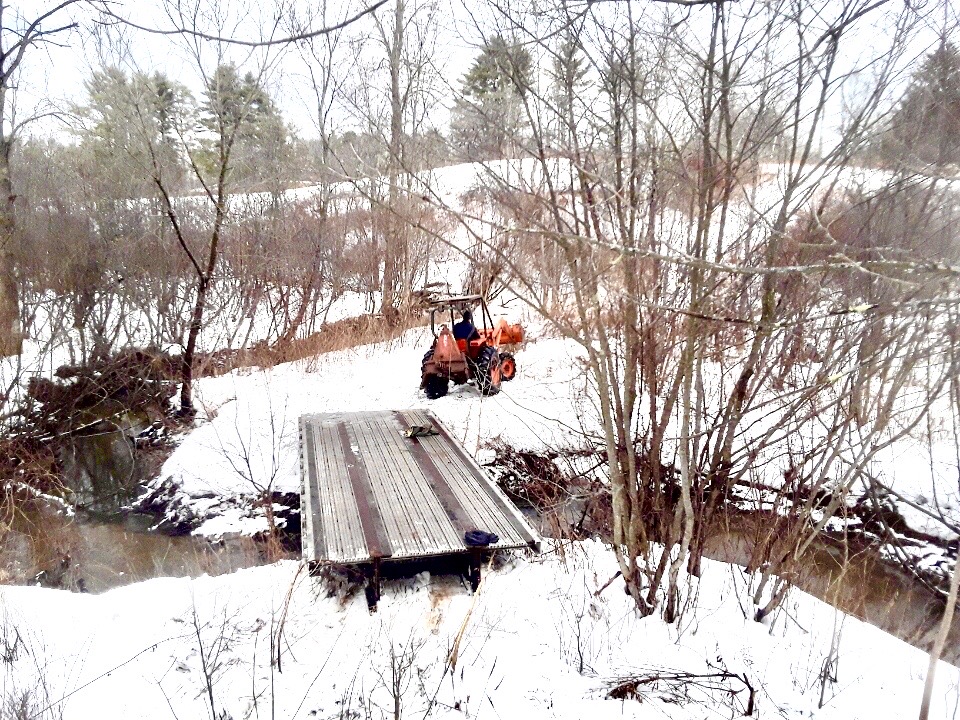 The first bridge in position.

With the help of a tag-team of tractors and a strong winch (a hauling device with a cable and crank), David and Jaime pulled the front, and slightly lighter, half to its spot crossing the water.

It was now time for the back, and much heavier, half to find its way up and then down a hill to the site of the second bridge. The bed was too much weight for David’s tractor to manage, so he asked a heavy equipment shop nearby for help moving the metal structure where it needed to go, and they agreed. “I thought that was just great because the golf course was pretty frozen, so we’d be able to really easily get it where it needed to go,” says David. “One of the workers showed up [hauling the bed], and I took him down a dirt road to avoid the golf course. He got totally bogged down and stuck. Totally stuck! He dropped the heavy trailer there [to lighten his load], but he couldn’t even get himself out.” With some persistence, he did manage to free himself without having to call for backup. However, the several-thousand pound piece of metal was now stranded on a dirt road, nowhere near where it needed to be.

This work was “much heavier and more difficult than I ever thought it would be,” says David. But with one bridge already in place, he knew he couldn’t give up. “I’m a surgeon. You start things, and you finish them!” With an elaborate system of pulleys and winches, he says, “I went from tree to tree and, with a friend, gradually dragged this thing about 300 yards and got it to the top of the hill where it needed to go. Then I went back with Jaime, and continuing the same way, we were finally able to get it across the stream. It’s in place.” He sounds relieved, even in his retelling months later. “It’s heavy work. It’s hard work.” 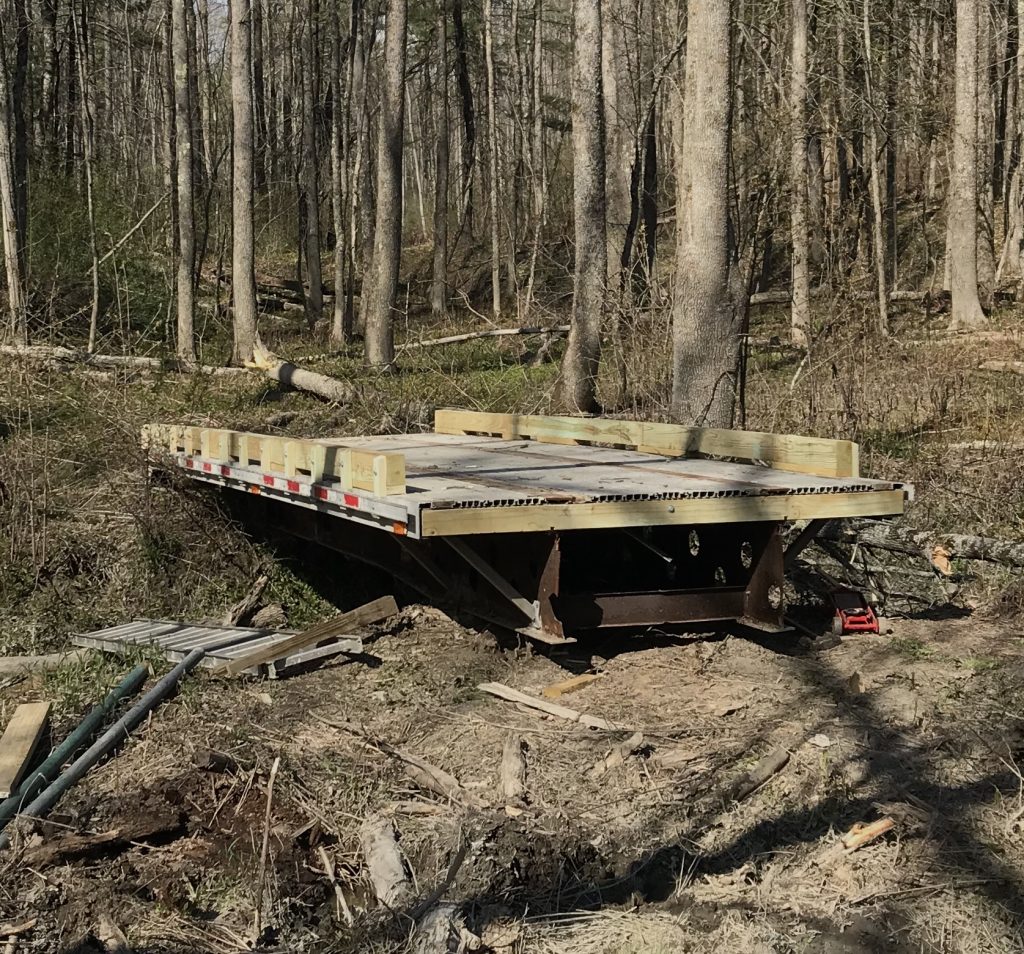 The second bridge in position.

Hauling steel through the woods and carving trailer beds in half was somewhat of a deviation from David’s other, less grueling, retirement hobbies. “I thought I’d be doing volunteer surgery after I retired, but I’ve been doing everything but,” he says. He’s finishing the last of four cedar-strip canoes he has built for each of his children. He says this is the best canoe he’s built yet, proof that “you learn by doing. Make a lot of mistakes, and learn what works and what doesn’t.” That’s also true of the trailblazing he’s done on his own property, where he has constructed his own small bridges that must contend with springtime flooding. He regularly mountain bikes a loop from his yard to the Cumberland Town Forest, through the woods behind Cumberland High School, and back home. During quarantine, David has been biking with his grandchildren who live nearby.

As for the bridges, the next step is to install ramps for skiers, hikers, and bikers to cross the bridge. “A friend of mine who owns a dock-making company heard about this [project]. He said he had some old dock ramps that had been in storms and were a little twisted beyond repair, but they’re perfect for us to use,” says David. The dock maker’s time is currently tied up with customer orders after a delayed start to his busy season due to the pandemic, but Portland Trails expects to have the ramps in place later this year. The final steps of this project will be for Jaime to clear the trails and install signs. A portion of these trails will connect to the Sebago to the Sea trail and will be open for year-round use. 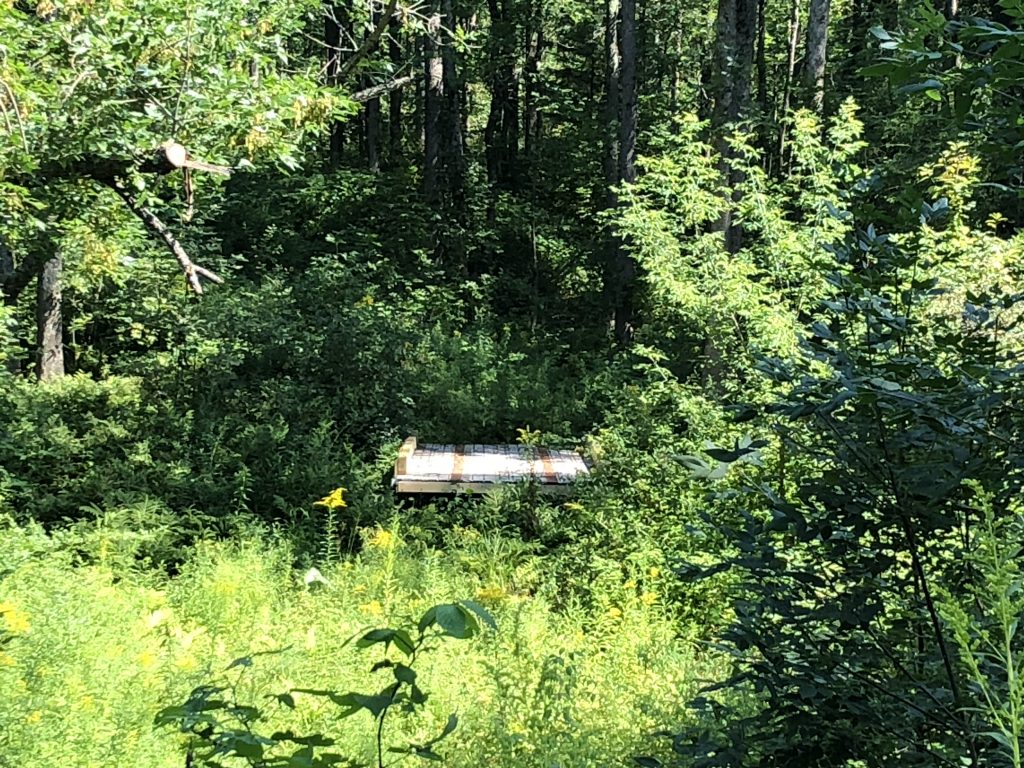 The second bridge, awaiting a ramp and a subsequent mow, will connect with the existing Sebago to the Sea trail for year-round trail use.