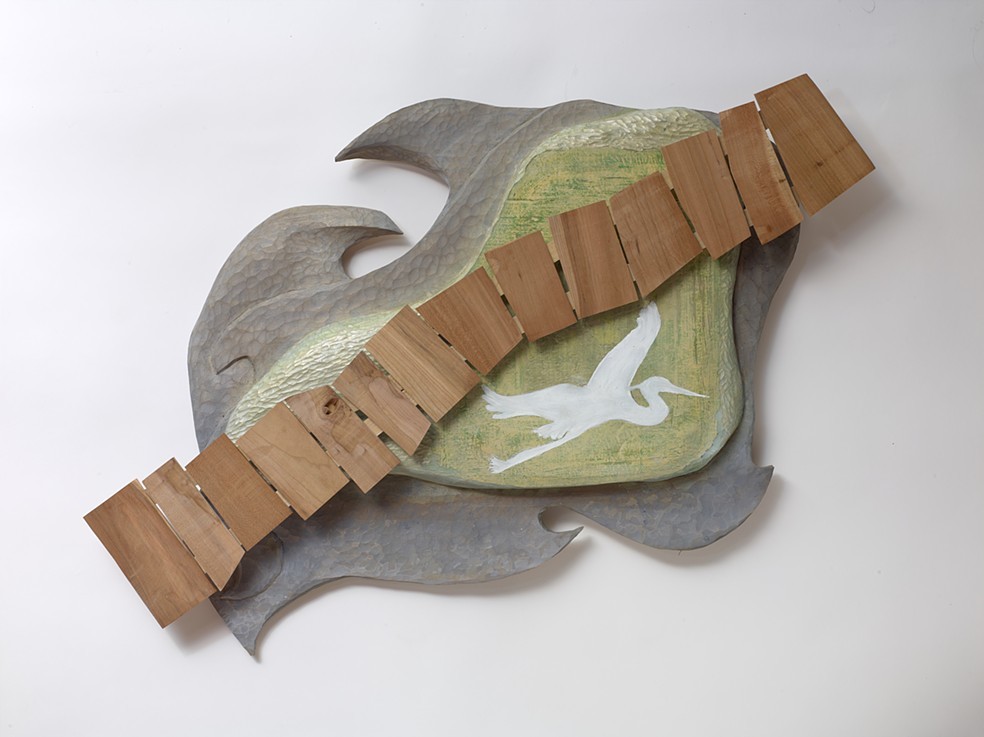 Lin Lisberger’s 2019 sculpture, Fore River Sanctuary, feels familiar the first time you see it. With understated detail, her woodcarving evokes a memory of standing on a long, curving bridge stretching across the sanctuary’s grassy marsh. “The Fore River Sanctuary trail is a really beautiful walk because it crosses so many different microcosms of land,” says Lin, a Portland-based woodcarver. “You’re going from the marshes and rivers into the woods, and then you end up at Jewell Falls, which is such a lovely little woodsy locale.”

This piece is part of an ongoing series Lin is working on called 20 Walks. On her website, linlisberger.com, she explains her purpose. “I walk a lot. I walk to exercise. I walk to get places. I walk to think. 20 Walks is about memories of several walks in many places around the world. Each piece captures a sense of place along with the memory of a particular moment or sight.” In the case of Fore River Sanctuary and another, Eastern Prom, she does just that with striking simplicity.

Fore River Sanctuary. “I don’t know if you’ve ever seen a great blue heron flying over there, but they do, and it’s fabulous when you see one, so that’s why the silhouette of the heron is on that piece.”

“My work has a lot to do with narrative, but what I realize I’ve done over time is I’ve taken narrative and abstracted it as far as I can, and an abstraction of something tends to be the simplification of it, or finding the essence of it,” she says. Other walks in this series so far include Kamakura, Japan, the Columbia River Gorge between Oregon and Washington, and the Grey Woods in Gorham, Maine.

Her latest piece in 20 Walks deviates from her one-walk-per-sculpture model and instead incorporates dozens of walks taken over the past few months into one interconnected piece she has appropriately titled COVID. It takes the shape of a wooden patchwork quilt, her own interpretation of a community quilting project started by artist Liza Lou called Apartogether. The project is intended “to foster connection and creativity during a time of social distancing and isolation,” according to apartogether.com.

“[Liza] proposed that people use what they have to make art. Old quilts were often made with scraps of fabric. That made me think that I have so many scraps of wood in my studio - I don’t throw out pieces of wood, especially if I’ve already planed and sanded them. Maybe they’ll go toward something, right?” says Lin. She had been taking photos of daily afternoon walks with her husband, “and I thought, ‘Oh, I’m going to draw [our walks] on these little pieces of wood, and maybe I can create a quilt with them.’” So that’s what she did. 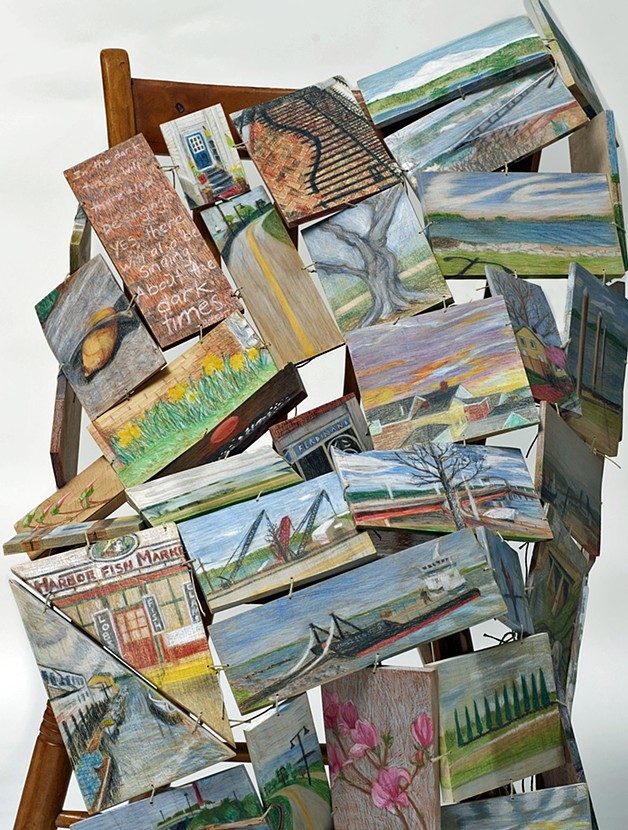 Close ups of COVID. “They were all done with colored pencils, which is what I had on hand,” says Lin. “I cannot tell a lie, I did go out and buy a couple of pencils, but mostly it was just what I had in the studio.”

Working on this piece became part of her quarantine routine: a few hours in her studio in the morning and a walk in the afternoon. Most of her drawings are of walks near her home on Munjoy Hill, including a few of the Eastern Prom. “We try not to use our car more than we have to. We’re devoted to self-transportation,” she says. Other Portland trails and green spaces featured in COVID include the Presumpscot River Preserve, the Western Prom, Harborview Park, and the trails behind Riverside Golf Course.

“At a certain point I thought, ‘Okay, I’ve done enough.’ Partly because I don’t think I wanted to cut up any more pieces of wood to make them thin enough to build this object, and also partly because I made something that was just about the size of a nice comfy blanket,” she says. Once she found a way to connect the separate drawings, she had made a sculpture 35 inches long and 26 inches wide. While she doesn’t advise snuggling under a wooden quilt, this piece does look coziest draped over a wooden chair like a throw. 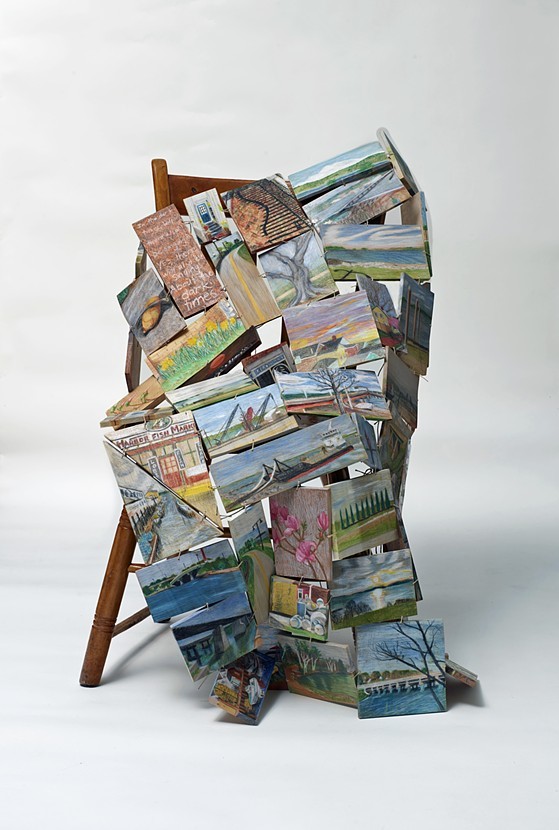 During the pandemic, walking has been a source of comfort in a challenging time. In COVID, these walks are represented by a tangible object - a quilt - that is intended to provide comfort.

Lin, who has considered herself a woodcarver since earning her graduate degree in sculpture from the University of Pennsylvania in 1980, considers the act of sculpting to be an important human experience. “I like making stuff. I think there’s something very pure about the act of the hand. It’s not very different from the act of body, like walking. Truthfully, I think everybody should make stuff because it gives you an appreciation not just for what you can do but also of form and objects in space. Which is what we, fundamentally, are,” she says.

“Portland Trails has given me (and so many others) a vast network of well-kept trails that welcomes me into so many different areas of Portland,” she says. “I love how the landscape and the sense of space is different in each one.”

She retired in 2018 from a 37-year career teaching sculpture, drawing, and 3D design at the University of Southern Maine. When asked how she’s faring in these unsettling times, she says, “I have the great fortune of being able to be an artist and express whatever anxieties and worries I have through my art.” Does making art help her anxiety? “Yes. I hardly know an artist who doesn’t use art to just avoid their own brain.”

You can see all of Lin’s sculptures at her website, linlisberger.com. Her ongoing series Who’s the Victim? is currently in a show at Cove Street Arts in Portland’s East Bayside. 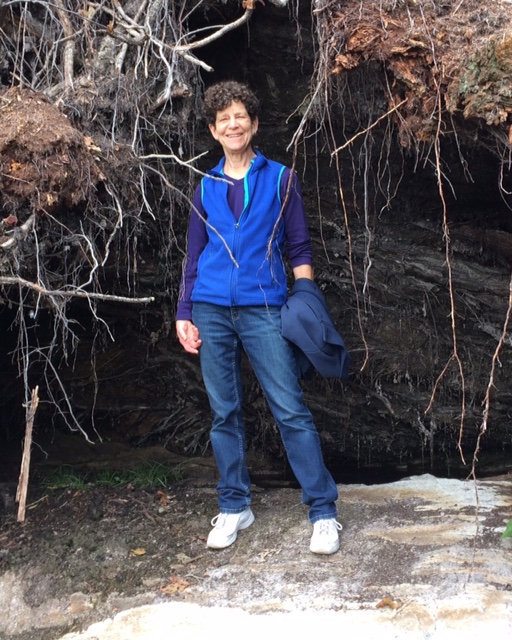