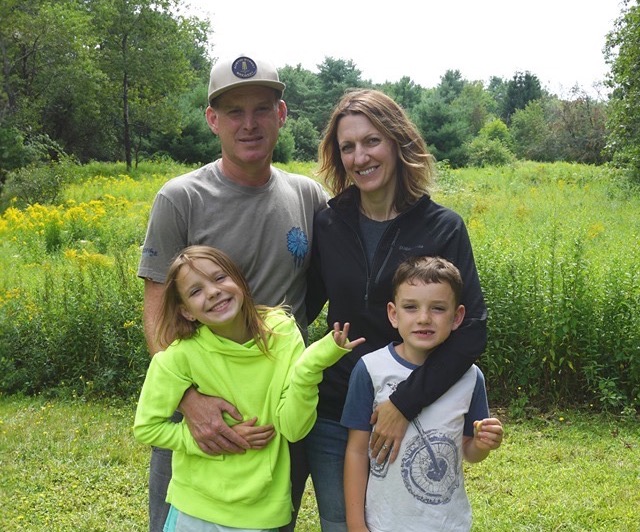 This summer, eight-year-old Rylan Phillips buckled his helmet under his chin, climbed atop his new bike, and pedaled through the woods for the first time. His dad, Russ, led the way while guiding him over the packed dirt and coaching him through the turns. For this father-and-son duo, mountain biking became an escape from the burdens of this year.

Rylan first showed interest in wanting to learn the sport after Russ dusted off his old mountain bike tires and hit the trails in Evergreen Cemetery earlier this year. He picked up the sport again as a way of managing his restless energy during the pandemic. “I had been running, but I thought, ‘I have to do something else, too,’” says Russ. After years of mountain biking, Russ transitioned to road biking about 11 years ago, around the time he and his wife, Cherie, had their daughter, Elyse. But when he started working from home full-time this spring and was no longer commuting to his office on his bike, he reattached his old mountain bike tires and “jumped back into a sport I hadn’t done in years,” he says.

His enthusiasm caught Rylan’s attention. “My son saw that I was mountain biking a lot. He needed a new bike and said he wanted a mountain bike, too,” says Russ. “It was a good opportunity for him to try something new.”

The beginning of their adventure came at a time when so much of Rylan’s life - and the lives of kids everywhere - was shrinking, the effect of COVID and its restrictions. “The kids not being in school and not having their normal day-to-day or spending time with their friends or playing sports in a normal capacity...I feel for them. That definitely weighs heavily on them,” says Russ. For Rylan, being on his bike was a chance to forget about all the new rules that dictate his life and instead focus on things like getting his front tire over a tree root. Learning to mountain bike gave him something to work toward and something to celebrate.

“When you’re that little and you go over a wooden bridge or make it up a tiny hill for the first time, you get really excited,” says Russ. “It’s a nice thing to see.”

This kind of distraction from stress, says Russ, “is probably the exact same reason why adults are picking up hobbies and doing things outdoors - they can get away from things and not have to think about the hard stuff. We could go out in the woods and just enjoy the serenity of nature.”

Of course, nature can also be exciting. On one ride through the Stroudwater Trail, one of the beginner-friendly trails they often biked, “out of nowhere, three deer ran up behind us and right along the trail,” remembers Russ. They spooked Rylan a bit: “I don’t think he had ever seen an animal like that so close - they were within ten feet,” says Russ. “It was pretty incredible. It was something he’ll always remember for sure.”

These moments on the trails, from close-range deer sightings to biking up a big hill, will no doubt stick with Rylan - and Russ - for years to come. And for tens of thousands of community members throughout Greater Portland, these trails have been the backdrop for some of this year’s best memories.

“It’s pretty amazing having Portland Trails here,” says Russ. “I feel very thankful. It took this pandemic for me to fully appreciate the trails.”