It doesn't look like much now, but the long-awaited connector under Tukey's Bridge between the back Cove Trail and the Eastern Prom Trail will most likely be completed by late spring 2000 - maybe earlier! In the next few months, plans for what may be the most important link in Portland's trail system will come to fruition.

Finally, walkers, bikers, joggers, babies in strollers, commuters...all will be able to follow a circuit around Portland's beautiful coastline from Back Cove Park across from Shop & Save to Commercial Street and back again without crossing a road. The connector will link eight miles of fresh air, stupendous views, and trails for commuting and exercising.

"The connector represents major recreation and scenic freedom," says Portland Trails Executive Director Alix Hopkins, beaming with enthusiasm. This short route under Tukey's Bridge will open up the whole end of the peninsula for recreation, alternative transportation, and reflection.

A walk under Tukey's Bridge now requires sure footing, given the steep slopes and riprap-lined shore. The lack of a well-worn footpath suggests few make the rugged journey. However, only a little imagination is required to visualize the City's planned construction.

The fully-paved connector will start at the Marginal Way end of the Easter Prom Trail, at the intersection of the trail and a concrete and rubble bridge access road. Following the access road, the connector will turn left where it will cut into the existing slope and traverse the distance under the bridge. Plans call for the use of the recycled granite curb from old city streets to be used for slope stabilization on the left side of the connector, while a five-foot chain-link fence will line the water side. From there, another sharp left and a few hundred feet will bring the connector to its intersection with the Back Cove Trail.

The connector is not a new idea. In fact, it may be about 100 years old considering landscape architect Frederick Law Olmstead's turn-of-the-century vision of parks with connecting greenways for Portland. Olmstead designed several of the city's green spaces, including the tree-lined Baxter Boulevard and the Eastern Promenade.

"This is a challenging project," says city engineer Tony Lombardo, who is heading up the connector project. "But, when all is said and done, it is going to look good!"

Tony's familiarity with the details of the project is apparent as he succinctly lists some of the connector's amenities. "There are a couple of catch basins that will have bike safe covers. Possible signage indicating a blind corner or mirrors will be installed to assist users. There may be a lookout on the Cove side with benches. And, if there is enough money, a lookout with bench on the B&M side facing the abandoned railroad bridge."

Perhaps the most striking natural feature of the connector area is the prevalence of the ocean's changing tides. Above the constant whine and thump of I-295, the sound of rising and swirling water can be heard loud and clear. It's startling at first. For most of us living in Portland, the eternal push and pull of ocean waters rarely, if ever, registers on our daily activities. A moment or two under the bridge reminds us that we're part of a larger setting."

"This is especially important in urban areas where people don't pass enough," remarks Alix. "You can see the darnedest things if you just take the time."

She's right. Watch a Double Crested Cormorant fly under Tukey's Bridge practically mocking the man-made structure. Note the late fall hues displayed by the leaves of the Staghorn Sumac. Indeed, the view of Back Cove - though dotted at a distance with houses and cars - is worthy of an extended look. So even here, under and around an interstate highway, there is so much to notice.

"The connector will forever change the way people use the Eastern Prom and Back Cove," Alix concludes. 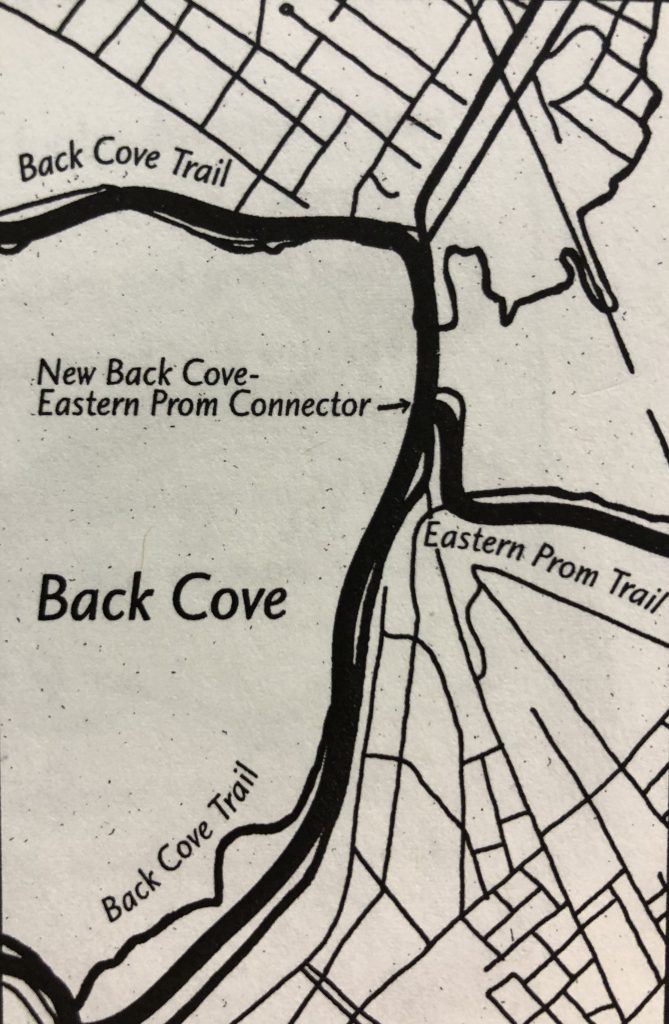