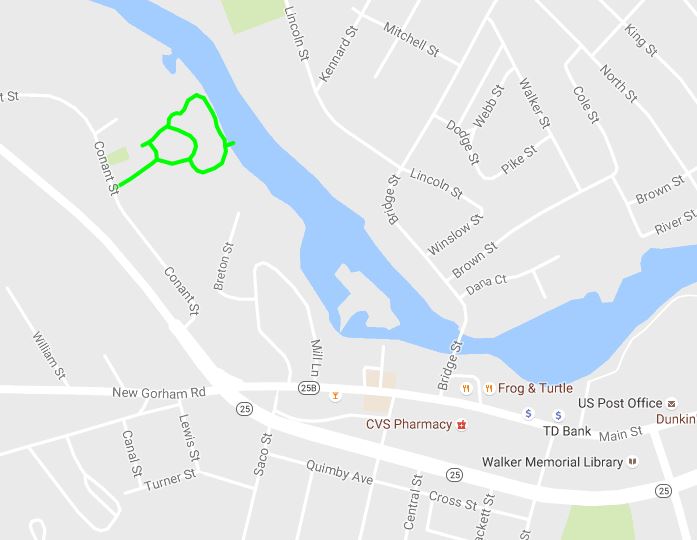 Donated by the late Ellie Conant Sanders, this beautiful riverfront conservation land offers meadowed trails, benches, a tree swing, picnic tables, and the opportunity to say hello to the neighbor’s goats! With more than a mile of trails, it offers great views of the Presumpscot and close proximity to Ernie’s Cycle Shop, as well as other local Westbrook trails. It’s a beautiful hidden gem of the Portland Trails network.

The Presumpscot River has thousands of years of history. For centuries, Indigenous people lived next to and in harmony with the river, hunting its salmon, bass, trout, and other sea-run fish and planting corn, beans, and squash on its banks. The word Presumpscot means the river of many falls, and Abenaki tribal leader Chief Polin once said that the Presumpscot “is the river which I belong to.”

When European colonialists built dams on the river in the 1730s to power paper mills and gristmills, this interrupted the passage of fish, threatening a major food source of the Abenaki people. To protect the river, the fish, and his people, Chief Polin walked to Boston (Maine was still part of Massachusetts) twice to ask the governor to intervene and order the installation of a fish passage but was given empty promises. In response, Chief Polin eventually armed his people to fight for their access to the river. He was killed in 1756 after a long conflict, causing the Abenaki people to either retreat or go into hiding.

In 2018, the nonprofit Friends of the Presumpscot River installed a memorial to Chief Polin on what’s now the Conant Property. When walking through the property, you’ll see a massive stone marker with a plaque bearing his name, along with four additional granite slabs to signify the four native tribes still active in Maine and a set of informational boards that detail Polin’s and the river’s history. Indigenous historian and professor Lisa Brooks was instrumental to the creation of this memorial.